If you have a PayMaya account, you may scan the QR code below to contribute.

Please send a screenshot of your successful transaction to our email beagiverph@gmail.com and put to subject/note “Gardeners Way to Table Sustainability”.

BEAGIVER kika.gawa14
November 8, 2013...a date to remember, victims and survivors of that furious typhoon Yolanda will never forget this date. How I wish it was just a dream, but looking back at the havoc it has done, my God it really happened. Everyone has each story to tell, different experiences during the onslaught of super typhoon YOLANDA. But what matter most now is we are still alive. Something to be thankful for, God saved us! We still have missions and to finish the unfinished business!!! That is why KIKA was born. What is KIKA and why KIKA? What is in its name anyway? KIKA comes from the word KINABUHI tikang ha KAMATAYON, LIFE after DEATH. It cannot be denied that at the height of Yolanda’s fury, almost all experienced death, it may not be physically death but a life facing total darkness. And considering this life as our second LIFE, we need to be ready to face new challenges and look for new horizons, a chance to do better with a new and brighter life full of hope, faith and love. November 8, 2014, is the first year anniversary of Yolanda when KIKA– Gios Anuronhon Multi-Purpose Association (KIKA-GAMPA) was organized. This group is composed of 36 women from Brgy. Anuron, Mercedes, Eastern Samar with individual differences but with the same dream and aspirations- that is to live a better life. Day after day, the number of members decreased until its first year anniversary November 2015, KIKA-GAMPA members remained only 20 yet determined and active members and that year also KIKA-GAMPA was changed to KIKA-GAWA (KIKA– GIOS ANURONHON WOMEN’S ASSOCIATION). Morning of Wednesdays and Saturdays are the days allotted by KIKA members for our communal garden, the first activity/project agreed upon as an organization. Collective efforts, cooperation and perspiration were our only tools to achieve openness, oneness and unity among members. One year was enough for us to know each other. We squarely faced ups and downs and trials along our way. July 15, 2015, date of KIKA’s first fall. One of the owners of the idle land we borrowed barred us to continue our farming activity. Indeed, it was really hurting and painful as we cultivated the land and planted assorted root crops and vegetables for almost 7 months which started in February 2015. But as we used to hear and say “life must go on”. We found another vacant lot and compromised now with the owner with a 2- year contract. KIKA has been a part of PAKISAMA (Pambansang Kilusan ng Samahang Magsasaka) in their project “Farm Rehabilitation and Organizational Strengthening through Community Resiliency” funded by Asia DHRRA (Asian Partnership for the Development of Human Resources in Rural Asia) since February 2015. The first project received by KIKA. On July 17, 2015, we are so lucky to be the first recipient of one member, one piglet in the Municipality of Mercedes, Eastern Samar. August 2015, another project was received by KIKA from PEOPLE IN NEED with its partner ACTED. NGOs who also believed in our humble ways as new women farmers. New technologies, seedlings, farm tools and Human Resources were freely shared to us. “Seek first the kingdom of heaven and all the rest will fall in line,” God's promise-the inspiration that served KIKA-GAWA. Aside from farming, we see to it that that we too have time together to pray to God the provider and giver of LIFE. Year 2015, we started the Bible sharing in a rotation manner to each member and at the same time to visit individual home garden every morning of Saturday. This activity is an enhancement of moral and spiritual values of each member. With the grace of God, praying and hoping that KIKA-GAWA will continue its mission and vision, and one day we could say...THIS IS IT!!! To God be the glory.
Send an email

Hi everyone!
Sharing you an update re our campaign, and extending our sincerest thanks
We now have 45 garden kits raised:)
We have 2 confirmed pledge from friends

Hi everyone!
We’re sharing you again another update re our campaign, and again our endless thanks to everyone who showed their support.

– We have raised 12 garden kits from friends.
– We also have several pledges from supporter of our association.

Update:
– We have 3 confirmed pledges from friends
– We also raised 3 garden kits from 1 pledge of our closest supporter .
Again, thank you so much po.

Update:
We now have 8 garden kits raised:)
Thank you so much to our givers:)May Papa God bless you more!
-We have another 1 confirmed pledge from a friend

Hi everyone!
Sharing you an update re our campaign, and extending you our sincerest thanks

– We have 2 confirmed pledge from a closest friend
– We also now have 3 garden kits from closest supporter of our association. 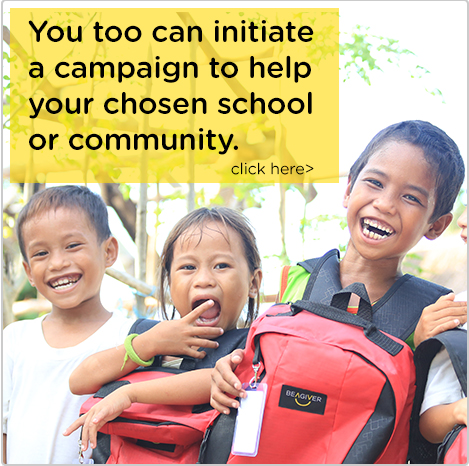